“Rejoice at my fate, for the cause is beautiful.”

The great Russian poet Pushkin once called her Eumenides—goddess of vengeance. She did not move armies like Jeanne d’Arc or spread her faith like St. Catherine. Her only mission was to rid France of a tyrant, avenging his victims and preventing him from committing new crimes. It was her sole mission, and she brought her own life to its altar selflessly and courageously.

Marie-Anne-Charlotte de Corday d'Armont, known as Charlotte Corday, was born 27 July 1768 in Saint-Saturnin-des-Ligneries, in the French province of Normandy, to a minor aristocratic family. She was a descendant of the famous French dramatist Pierre Corneille.

When Charlotte was fourteen years old, she lost her mother and her older sister. Her grief-stricken father sent her and her younger sister to the Abbaye aux Dames convent in Caen. While living there, Charlotte was allowed to read not only spiritual books, but also the writings of Plutarch, Rousseau, and Voltaire. Those books had a great influence on the impressionable and intelligent girl, and they made her a "Republican well before the revolution,” by her own words. In 1790, the monastery was closed, and in the beginning of 1791, Charlotte returned to her father’s house.

The enthusiasm with which she met the first years of the great Revolution gradually evaporated as events turned ugly. “Revolutions are often initiated by idealists, carried out by fanatics, and hijacked by scoundrels,” as was once observed by Thomas Carlyle, and the French Revolution was not an exception. Through violence and scheming, a coterie of pathological murderers replaced the initial revolutionary leadership. The bacchanalia of mass killings and executions swept the country. The infamous September Massacres of 1792 and the execution of King Louis XVI terribly shocked Charlotte, and a sense that some unspeakable evil was now threatening the very future of the Republic completely overwhelmed her. She decided to take matters into her own hands.

For Charlotte the evil was personified by Jean-Paul Marat, the main ideologue of the ruling Jacobins. A sophisticated demagogue and a ruthless radical, he was an inspiration behind the Terror, and was seen by many as a man responsible for the bloody nightmare that descended on their once beautiful country. 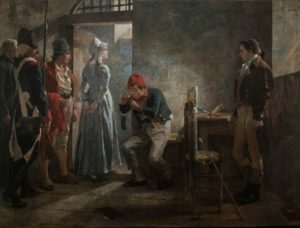 Charlotte Corday being escorted to her execution, by Arturo Michelena (1889). The warden carries the red blouse which will be worn by Corday and the painter Hauer stands at the right.

The rest is well known. On 13 June 1793, Corday went to Marat’s home, claiming she had important information about an opposition revolt brewing in the city of Caen. At that time, Marat had a skin disorder, so he conducted most of his affairs while in a bathtub. After Marat wrote down the names of Girondins that Corday gave to him, she stabbed him with a knife. The blow was delivered with astounding precision, the knife struck his carotid artery, and he died in seconds. Charlotte was arrested on the spot.

At the trial, held on the morning of July 17, she was defended by the famous jurist Chauveau-Lagarde, the future defence attorney of Marie Antoinette, the Girondists, and Madame Roland. Charlotte behaved with such calm and composure that it deeply impressed everyone present. Once interrogated, she stated she had no associates. The public prosecutor demanded the death penalty for Corday. The jury unanimously found her guilty and sentenced her to death. 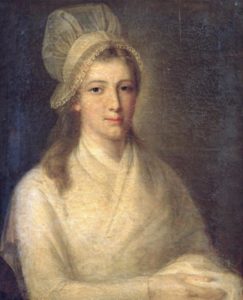 Charlotte Corday, painted at her request by Jean-Jacques Hauer, a few hours before her execution.

While waiting for the execution, Charlotte posed for the artist Hauer, who painted her portrait while she talked with him on various topics. As a farewell gift, she gave Hauer a lock of her hair.

By court order, she was to be executed in a red shirt, clothes reserved specifically for assassins. Putting on the shirt, Corday said, "It is the toilet of death, but it leads to immortality."

Charlotte was executed at 7:30 in the evening on July 17 at the Place de la Revolution. According to Sanson, her executioner, he almost never encountered such courage in those sentenced to death. All the way from the Conciergerie prison to the place of execution, she stood in a cart, refusing to sit down. When they arrived, Sanson tried to block the guillotine from Charlotte’s view; she asked him to move away, because, as she said, she had never seen this structure before and was curious to see it.

The day before her death, Charlotte wrote to her father:

“Forgive me, my dear Daddy, for having ended my existence without your permission. I avenged many innocent victims; I prevented many other disasters. The people, when they become disillusioned someday, will rejoice to be rid of a tyrant. If I sought to persuade you that I was leaving for England, it's because I hoped to remain incognito, but I recognized its impossibility. I hope that you will not be tormented. In any case, I believe you will have defenders in Caen. I took Gustave Doulcet as my defender; a case like this permits no defense, so it is just a formality. Farewell, my dear Daddy. I beg you to forget me, or rather to rejoice at my fate, for the cause is beautiful. I embrace my sister, whom I love with all my heart, as well as my parents. Do not forget Corneille's verse: ‘The crime causes the shame, and not the scaffold!’ The judgement is tomorrow at 8 o'clock. This July 16.”