“Some praise me because I am a colored girl, and I don't want that kind of praise. I had rather you would point out my defects, for that will teach me something.” 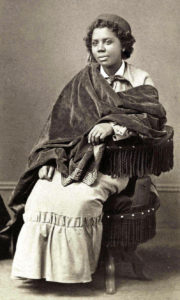 When you hear the expression “Against all odds,” some names come to your mind quite naturally, and Edmonia Lewis is definitely one of them. She was born on the 4th of July, 1844 in Greenbush, New York. Her father was Afro-Haitian and her mother was of Mississauga Ojibwe and African-American descent. Both parents died when she was nine years old, and Edmonia and her older half-brother Samuel were adopted by her mother’s relatives. They lived in Niagara Falls. Three years later, her brother left for San Francisco, California. Samuel not only insisted on going to school, but also paid for Edmonia’s tuition.

In 1856, Edmonia enrolled at New-York Central College, McGrawville, a Baptist abolitionist school. Three years later, in 1859, Edmonia was sent to Oberlin, Ohio, where she attended the secondary Oberlin Academy Preparatory School for the full, three-year course, before entering Oberlin College, one of the first US educational institutions to admit women of different ethnicities. At Oberlin College Edmonia became interested in sculpture and began her career in art.

During the winter term in 1862, just a few months after the beginning of the American Civil War, Edmonia went sleigh riding with her two college friends, Maria Miles and Christina Ennes, and invited them home for a drink. Soon after, Miles and Ennes became seriously ill. Doctors came to the conclusion that they were poisoned, and they were not even sure if the women would survive. A few days later, Miles and Ennes were feeling better, so the authorities did not take any measures.
Nevertheless, while Edmonia was walking home alone one night, she was dragged into an open field by unknown people, badly beaten, and left there.
After the attack the police arrested Lewis on charges of poisoning her friends. On behalf of the college, she was defended by a college graduate, the only African-American lawyer in Oberlin, John Mercer Langston. Although most witnesses testified against Lewis, and Lewis herself refused to testify, Langston managed to convince the court of her innocence.
About a year after the accident, Edmonia was accused of stealing artists' materials from the college, which led to being forbidden from registering for her last term by the principal of the Young Ladies' Course, Marianne Dascomb. Although Edmonia was acquitted due to lack of evidence, she was unable to graduate from the school.
After college, Lewis moved to Boston in 1864, where she began to pursue her career as a sculptor. A famous sculptor Edward Augustus Brackett, who specialized in marble portrait busts, became Edmonia’s instructor. Under his tutelage, she crafted her own sculpting tools and sold her first piece, a sculpture of a woman's hand, for $8. Working with Brackett, Edmonia met Colonel Robert Gould Shaw, the hero of the US Civil War, and created his sculpture.

In 1864 she opened her studio to the public in her first solo exhibition.

To continue her studies and practice, Edmonia moved to Rome in 1865. In Rome, she specialized in busts, opened her own workshop and gained fame: in Italy, her exotic appearance caused the opposite reaction rather than the one she faced in the United States. In Rome she developed her neoclassic technique. For example, she depicted the heroes of her sculptures not in modern clothes, but in ancient togas or draperies.

After some time Edmonia returned to the United States, where she continued sculptor work. Her works were sold for large sums of money. In 1873, an article appeared in the New Orleans Picayune newspaper stating that "Edmonia Lewis had snared two 50,000-dollar commissions". Her increased popularity has turned her studio into a popular place for tourists.
Edmonia had many major exhibitions during her rise to fame, including one in Chicago in 1870, in Rome in 1871, and in Philadelphia in 1876.

Among those whose busts she created at that time were the poet Henry Longfellow, the abolitionist John Brown, the politician Charles Sumner, president Abraham Lincoln, and others. The sculpture of Longfellow created by her was placed in the library of Harvard University.

Her sculpture "Forever Free", where she depicts a pair of African Americans breaking chains - one of the most famous works.

In the late 1880s, the genre of neoclassicism began to gradually lose its popularity, as did the popularity of Edmonia's artwork. The last years of her life were poorly studied, even the year of her death is controversial (it was believed that she died in 1890). Recent studies have shown that she lived in London until her death and died in 1907. Edmonia was never married and, as far as known, had no children. She devoted all her life to the beloved art.