"The Princess, great in the palace, fair of face, beautiful in the double plume, mistress of joy, united with favour, whose voice people rejoice to hear, Great Royal Wife, his beloved Lady of the Two Lands." 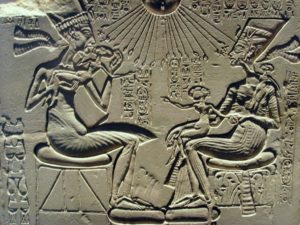 Akhenaten and Nefertiti with their children

There’s probably none in the educated world who have never heard her name. Nefertiti (c. 1370 - c. 1330 BC) was an Egyptian queen and the Great Royal Wife of the ancient Egyptian pharaoh Amenhotep IV (also known as Akhenaten) of the XVIII dynasty. Nefertiti, apparently, was a step-mother or a mother-in-law of pharaoh Tutankhamun.

In old Egyptian language her name meant “The Beautiful One Has Come.” Nefertiti has become one of the most famous women of the ancient world and an icon of feminine beauty because of her bust, which is currently on display in Neues Museum in Berlin. This bust is a great example of how skillful ancient Egyptian sculptors were in such a realistic reproduction of human faces. Nefertiti bust is believed to have been crafted in 1345 BC by the sculptor Thutmose, in whose workshop the bust was found.

Nefertiti and the Egyptian Pharaoh Amenhotep IV are known for their religious reform, which changed the ancient Egyptian polytheistic religion to a new, de facto monotheistic form called Atenism. This worship was dedicated to the Sun disc Aten. 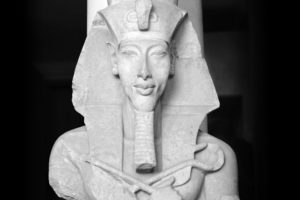 The new cult was established in the 4th year of Amenhotep’s reign (1346 BC). It is believed that in the same year he began the construction of the new capital - Akhetaten (known today as Amarna). In the 5th year, Amenhotep officially changed his name to Akhenaten in the respect of the new deity Aten. Since then Nefertiti was known as Neferneferuaten-Nefertiti.

In the 7th year of the reign (1343 BC), the capital was officially transferred from Thebes to Akhetaten, although the construction of the city, apparently, lasted for at least another two years (until 1341 BC).

During the reign of Akhenaten (and perhaps later) Nefertiti wielded an enormous power, there is even an evidence that somewhere in the 12th year of her husband's rule she received the status of a co-ruler, becoming equal to the Pharaoh himself. Her images on the walls of the temples are of the same size as Pharaoh’s, symbolizing her importance.

It is still a mystery what has happened to her after Akhenaten died. Some scholars believe that after her husband’s death, and before the accession of Tutankhamun, Nefertiti ruled a country under the name of Neferneferuaten.

Soon after that the old religion was restored, and its priests returned to power. Remembering almost two decades of persecution and humiliation, they laid a curse on the late pharaoh’s body, spirit, his very name, his capital city, and everything associated with him, closely or remotely. They tried to erase his very memory purging his name from all the records they could find. Akhetaten was abandoned and after several years was swept with sands, with only a few ruined royal buildings scattered around the desert reminding the world of its former glory.

Was Nefertiti also cursed and gone? Was she spared? How did she die? We don’t know for sure.

When you visit the Neues Museum, you will discover a strange thing: when we look at her bust long enough we may notice a slight sarcastic smile on her face, as if she, Nefertiti, the Great Royal Wife, makes fun of all of us. However maybe it’s just an optical illusion.