“If the soul is not immortal then life will become a playground
for the evil doers who will die after having lived a sinful life.”

Theano was a student and wife of the ancient Greek philosopher, great mathematician Pythagoras, who lived in VI - V centuries BC. Her very life is shrouded in mystery and became a subject of legends and myths. Some scholars even believe that there was more than one woman now identified as Theano, while others think that in fact it was only one person using various pseudonyms. Her only detailed biography was compiled by an ancient historian and chronicler Diogenes Laertius, who lived almost seven centuries later and who himself relied on various sources which are not known to us.

According to him, Theano was born circa 546 BC, probably on Crete. She is believed to be a daughter of Brontinus the Orphic, a member of a religious group worshiping Osiris. 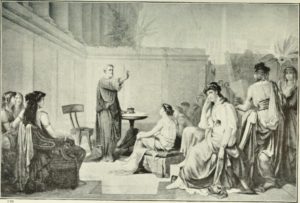 After returning from his travels, Pythagoras founded a school or, as is often called, a university in Crotone, a Dorian colony in South Italy. Pythagoras gathered a small group of devoted students, whom he taught philosophy, as well as the foundations of mathematics, music, and astronomy, which were considered by him to be a triangular basis for all arts and sciences. Besides this, Pythagoras taught techniques of meditation, self-awareness, self-control, self-esteem, and self-appreciation.

At the age of 60, Pythagoras married his student Theano, a wonderful beautiful girl who conquered the heart of a philosopher with her pure love, unlimited devotion and faith.

It is known that she was an important person at Pythagoras school. Some researchers believe that most of Pythagoras’ writings were made by Theano.

It’s known that Theano wrote about medicine, physics, mathematics and child psychology. Theano was an author of “Cosmology”, “The Theorem of the Golden Mean” (irrational numbers which appear in lots of aspects of nature are described), “The Theory of Numbers”, “The Construction of the Universe” (she created a theory about the universe and 10 concentric spheres), “On Virtue”, and Pythagoras’ biography “Life of Pythagoras.”

Their marriage turned out to be perfect. Theano became so enthusiastic about her husband’s works that after his death she became a leader of the Pythagorean school.

The family of Pythagoras was an example for the entire city, their house was regarded as a temple of goddess Demeter, and the courtyard was called a temple of Muses.

Theano gave birth to two sons and three daughters, who were faithful followers of their father’s philosophy. One of the sons subsequently became a teacher of Empedocles and introduced him to the Pythagorean education.

Being a proponent of the infinite universe, Theano believed in the immortality of human soul as its integral part. Metaphorically speaking she reached this immortality.